Normandië is een ontzettend leuke en mooie provincie van Frankrijk. This region divides into an eastern half, Haute-Normandie, along the Seine Valley and similar in scenery to the Ile-de-France; and the more rugged Basse-Normandie to the west, more akin to neighbouring Brittany. Vast expanses of land are culti- vated; orchards and lush cattle pastures produce the famous strong cider and pun- gent cheeses. The Atlantic climate produces changeable but pleasant summer weather. Visitors should be wary of incoming tides, which can move very fast.

The island sanctuary of Mont-St-Michel ° [map] at the border between Normandy and Brittany is a wonder of the Western world. That first glimpse of the towering, steepled abbey (www.ot-montsaintmichel.com; daily May–Aug 9am–7pm, Sept– Apr 9.30am–6pm) rising from the sea on its rock is a moment you will not forget. If you’re coming from Caen, stop in Avranches for a panorama of the bay from the Jardin des Plantes, or drive out to the coast road (D911) between St-Jean- Le-Thomas and Carolles. From other directions, head for the coast road via Cour- tils for that all-important vista. Unfortunately, the crowds of tourists in the summer can be overwhelming, and some visitors prefer to admire Mont-St-Michel from a distance. The view of the illuminated mount at night is spectacular from the other side of the bay at le Grouin du Sud.

The bay around the island’s granite outcrop has steadily silted up in recent years, so that it’s isolated only during very high tides. These are most dramatic
during the spring and autumn equinox, when the sea comes in at nearly 50m (164ft) a minute over a distance of 15km (9 miles). This proved dangerous to pil- grims who approached the abbey across the sands (the causeway joining the is- land to the mainland was not built until 1874). No cars can park at the base of the mont and bus shuttles have been used to transport visitors, and will be replaced or complemented by the Maringote, horse-drawn shuttles. A Visitor Centre displays plans on the future of access to the mont. In the 8th century, on what was once a Celtic burial ground (originally called Mont-Tombe), the bishop of the nearby town of Avranches began by building an oratory – at the prompting, he claimed, of the Archangel Michael. In 1017 Bene- dictine monks started work on the flat-roofed abbey shown in the Bayeux Tapestry. By the 14th century, the abbey was surrounded by a fortified village. The pil- grims flocked here throughout the Hundred Years’ War, paying tolls to the English, who controlled the surrounding territory – though they never succeeded in break- ing through the mount’s defences. After a period of steady decline, the monastery was dismantled even before the Revolution. It was saved from total destruction only to end up, ignominiously, as a state prison. Today, however, the mont is once again flooded with pilgrims and is a truly awe-inspiring experience. If you make your way to the upper terrace of the mont, which commands splen- did views of the bay, a variety of guided tours (conducted in English, French or German) will take you down through three levels of abbey buildings: the church, cloister and refectory at the top; the Salle des Chevaliers (Knights’ Hall) and Salle des Hôtes (Guests’ Hall) in the middle; and the storeroom and almonry under- neath. The abbey church combines a sturdy Romanesque nave with a more airy Flam- boyant Gothic chancel. The choir and chancel do not stand on the island’s granite core but on a platform formed by three crypts, with the massive columns of the Crypte des Gros Piliers doing most of the work. In a magical space overlooking the sea, the beautifully sculpted columns of the cloister create a perfect framework of grace and delicacy for a moment’s medi- tation. With the cloister, the monks’ ethereally lit refectory, the grand Knights’ Hall

and the elegant Guests’ Hall together make up the masterpiece of Gothic archi- tecture that earned the abbey the name La Merveille (‘Wonder’).

Rouen is the ancient centre of Normandy’s thriving textile industry and the place of Joan of Arc’s martyrdom – a national symbol of resistance to tyranny. The writer Gustave Flaubert was born in Rouen and set his masterpiece Madame Bo- vary here. Normandy’s capital suffered devastating bomb damage in 1944, and many buildings have since been lovingly restored or reconstructed. The beautiful me- dieval and Renaissance centre around the cathedral has been renovated and pedestrianised. Rouen continues to work on its monuments and public buildings, and quayside renovations have brought life back to the riverside with new prome- nades. To tour the centre of the city, start your walk at the western end of the historic district, on place du Vieux-Marché. The old and new Rouen come together around the bright and airy market halls and the attractive modern Eglise Ste-Jeanne-d’Arc. Inside the church are some fine 16th-century stained-glass windows, salvaged from an older church bombed in 1944. Nearby is a monument to mark the spot where Joan was burned at the stake in 1431. 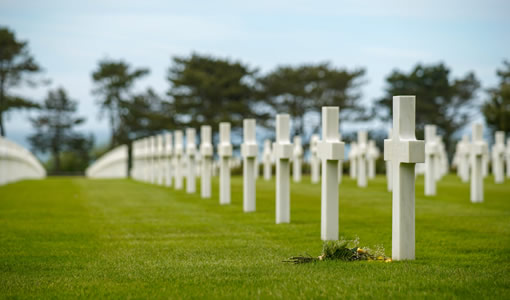 Before 6 June 1944 the peaceful stretch of coast west of Cabourg, from Ouistreham to the Cotentin peninsula, was known simply as the Côte du Calvados, a flat, undramatic shoreline broken by a few unspectacular chalk cliffs and sand dunes. And then, at 6.30am on D-Day, came the first of a fleet of 4,266 vessels to turn the beaches into beachheads (known as the D-Day landing beaches ‡ [map]) with their now famous code names: Sword, Juno, Gold, Omaha, and Utah.

Today the visitor will find an atmosphere of rather bleak serenity that is in itself as evocative as the remaining concrete bunkers and simple monuments on the sites of the action and the miles of crosses in the military cemeteries. There are also many excellent museums commemorating the battles. For more information, visit www.normandie44lamemoire.com. To see where the British and Canadians, with the support of the Free French forces, attacked on the eastern half of the beaches, start out at the port town of Ouistreham/Riva-Bella and drive west along the coast road to Bernières and Courseulles (where the Canadians staged their Juno Beach landings, marked by monuments on the beaches) and then the Canadians’ cemetery 4km (2.5 miles) to the south at Reviers.

At Arromanches you can see the most fascinating monument to British inge- nuity in the Allied landings – the remains of a Mulberry harbour. The floating steel- and-concrete jetties and pontoons, hauled across the English Channel, were the only way of unloading tanks and heavy artillery on the gold beach coastline without natural harbours. The Musée du Débarquement (tel: 02 31 22 34 31; www.musee-arromanches.fr; daily Feb–Dec, variable hours) includes a film detail- ing one of the momentous days in history of the modern era. The Musée du Débarquement Utah (www.utah-beach.com; daily June–Sept 9.30am–7pm, Oct–May 10am–6pm) and monument are 5km (3 miles) inland from La Madeleine, near Ste-Marie-du-Mont. Staff at the local tourist offices will be able to direct you to other museums and to the region’s 27 Allied and German military cemeteries.